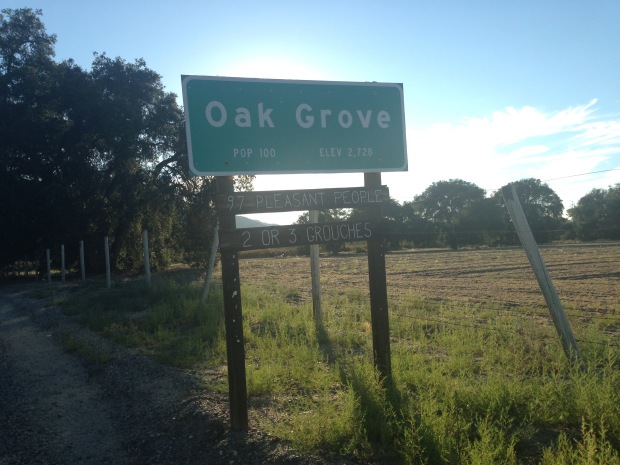 Longest day yet! That will be most days for me, as I am so new to this. I felt pretty good, and it helped that the route was mostly downhill. The best part of the day was meeting some fellow riders who were headed south towards the end of their trip! They saw me wandering around the campground and invited me over for dinner. I ended up crashing at their campsite and waking up early with them in the morning. The group of 4 Canadian guys have been doing the Sierra Cascades in two week sections for the last 4 years. Holy cow, they really have set a pace to meet that timeline! I am intimidated by the people who manage to gut it out and just rock 70-80 mile days without any build up phase. Maybe I’ll get to that point.

It was a great way to end my day, which had started out late and a little rough. On the flight over, one of my mistakes was sort of breaking, sort of misplacing parts for my rear view mirror. My handlebar set up is a little unique and needs a special kind of mirror that I found online. I ordered a new one from Amazon to meet me via general delivery at the Julian post office. Alas, it did not arrive. And wouldn’t. The particular carrier was totally stymied by the perfectly legitimate option of just delivering it to the post office. This made me a little grumpy, which is not a good way to start riding. So I tried listening to music for a bit today when it got hot. One earbud in, light music. It worked pretty well! Until I got to a song from my 80s mix with a “around the world” repeated a million times with a sound that was probably supposed to be a plane taking off, but was just a loogie type noise. I’ll try to find a you tube of it.  Urgh. Less inspiring, and will be deleted.

Also not inspiring was the heat in the desert. I think I only like the desert at sunrise and sunset. Have I mentioned that already? I ended up parking my bike and setting up my chair for a nap and lunch at yet another fire station in Warner Springs. Lo and behold just down the road was a PCT support center that the community has, and which allowed me to wet my shirt and hair for the heat after I got going again. It was dry in like 5 minutes, but it helped. As the sun started to set, things cooled off, and turned golden beautiful. I found it interesting to pass a large tract of land owned by the Navy for their survival school. Navy? Desert? I guess they were borrowing from the boy scouts to “be prepared.” Also, I’ll bet that is an awful training.

Thanks to Dwayne, Everrett, Fabian, and Tim for an evening of rejuvenating conversation!