Wahoo! I crossed the 100 miles pedaled mark this morning! I was ridiculously excited, even though it feels relatively slow going. However, the views of Anza Borrego Desert State Park were pretty incredible in the morning light. I also found the PCT and hiked about 100 yards along it. You can see it going for miles across the desert, up and down and up and down again with very little shade.

The PCT is in the bottom left corner. Out beyond is Anza Borrego Desert.

Today was a “rest” day, but I still biked a healthy distance. Most of it was downhill (remember, what goes down must go up again). In town, I took advantage of the local library and took a nap in a cushy chair, and spent several hours reading. My mirror had not arrived at the post office, and I’m worried this will be due to Amazon maybe not doing general delivery. But they said it’ll be here tomorrow when I called. So I wait. In the mean time, today’s adventure was finding a place to stay. The San Diego county parks are awfully expensive compared to my budget expectations, so it’s time to get creative. When I was asking the ranger if they offered hiker/biker prices, which they don’t, he had a thought and said he’d call me back in a few. So I waited some more. He called a friend who owns a winery, and who is graciously letting me crash there. It was a couple miles out of town on a very hilly road, but it was beautiful in the vineyard. There is a group setting up for a blues music festival that starts tomorrow. At first they were confused and were refusing to let me stay. I think my eyes watered up a little, and the guy slowed down enough for me to say that I wasn’t there for the festival and wasn’t trying to scam his operation. No real tears yet, though 😉

I managed to cook real food for the first time tonight. Mostly I’ve been eating deli sandwiches. So I made spanish rice with tomatoes, coconut milk, lime, and avocado. But the portion turned out HUGE. Travelling solo, the food gets a little complicated. So full. And leftovers in a ziplock for tomorrow.

There is a cat here to keep me company, and he reminds me a little of Alanna’s (only my nerd friends will understand), with soft black fur and purple-grey eyes. He is my protector for the evening, the vineyard guardian. 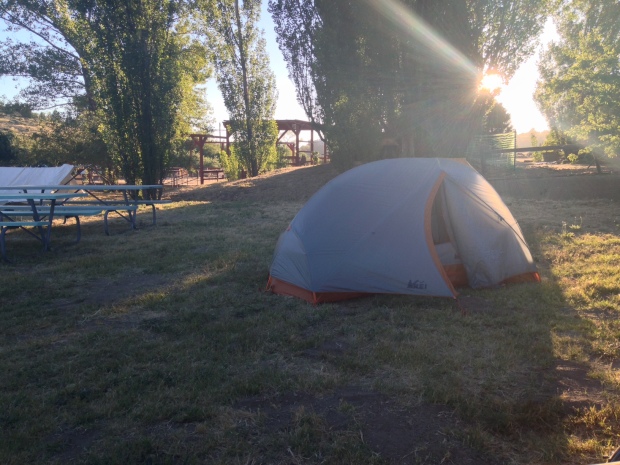